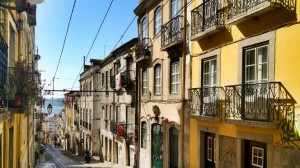 Historic Streets Of Lisbon
Lisbon is the capital city of Portugal with a total population of 3million inhabitants within the the urban limits. Lisbon is also one of the oldest cities in the world predating other European cities such as London , Paris and Rome by hundreds of years. The Lisbon region is the wealthiest in Portugal with the largest employment sector being services and administration followed by tourism which has been rising rapidly during the past five years.
Lisbon airport carries approximately 13million passengers per year and hotel occupancy rates for the city average above 80%. Located on the western coast of Europe Lisbon enjoys a Mediterranean climate with mild winters and average 300 days of sunshine per year. The city is also known as the "Lusophone capital of the world" which refers to all the Portuguese speaking countries globally.
Currently undergoing a major urban regeneration program the city centre is attracting many high net worth property investors. Key areas of interest in the centre are Chiado, Bairro Alto, Principe Real, Avenida Liberdade and Baixia. Requalified / Renovated historical buildings in the above areas have a sales value of between €3,500 - €5,000 per m2. In the suburbs popular zones include Cascais, Estoril and Sintra. All of the above are within 15 minutes of the city centre and have easy access and good transport links. Cascais & Estoril are where the closest Lisbon beaches are and also where the majority of the Lisbon golf courses are located. Sintra is a Unesco world heritage site and is one of the most beautiful and historical zones in Portugal.
Real estate values in the prime zones in and around Lisbon city are stable whilst long term rental yields have been increasing yearly with 7% - 9% yields generally realised today. Secondary zones have seen a decrease in property values due to tightened bank finance and are expected to contract further over the next 18 months. This is one of the main factors in the increase of rental yields in the prime zones.
The market for short term holiday lets has increased dramatically over the past five years and city centre apartments can realise up to 10% - 15% yields subject to suitability and location. The most popular property types are historical renovated buildings within walking distance of the attractions of the city.
Published in Guide to Portugal / Portuguese Life / Portugal Property / Travel
Publicada por Vitor Pissarro à(s) 04:45